Pass it to Bulis

Everyone is well-aware that the current Canucks management has no particular fondness for analytics. Sure, Ben Cooper is supposedly their analytics guy, but one suspects his role as video coach is seen as more important and takes up more of his time than any analytics work he might do.

After all, Jim Benning is an old-school guy who likes to make judgements based on what he sees. It’s why he still goes on numerous scouting trips and likely why he likes to acquire players with which he or one of his staff is personally familiar. He likes to know about a guy’s character, work ethic, and other things that can’t be captured by a number.

Look, analytics isn’t (aren’t?) everything and there’s still plenty of room for in-person scouting, intangibles, and gut feeling, but the fact is that there are very few teams left in the NHL that ignore analytics entirely. The Canucks appear to be one of them.

For years, fans complained that the Canucks didn’t draft enough players out of the WHL, ignoring their own backyard and missing out on some great players. Whether that criticism was warranted or not, they’ve done the same in the world of analytics, with several Canucks Army bloggers getting hired by NHL (and in one case WHL) teams.

Really, the only reason we don’t have inside sources with the Canucks is that they never hire the guys we know.

If you need an illustration of how the Canucks have ignored analytics under Jim Benning, here’s a simple one. Here’s a list of their acquisitions, whether by trade, free agent signing, or waiver claim, over the last couple years, at least the ones acquired to play in the NHL.


This isn’t particularly advanced analysis; I’m keeping this one simple on purpose. Above 50% is good—it means the puck is in the offensive zone more than the defensive zone.

As you can see, the Canucks under Benning have acquired exactly three players with a career CF% above 50%. Of those three, two of them—Matt Bartkowski and Linden Vey—were playing for teams whose CF% was better when they weren’t on the ice, suggesting that the quality of their respective teams carried them.

That’s not surprising: the Kings are the best puck possession team in the NHL and the Bruins were right up there as well when Bartkowski was with them. Away from the Bruins, Bartkowski has crashed hard.

Sidenote: the league leader in CF% among defencemen with at least 200 minutes this season? Frank Corrado, at 60.4% through 21 games with the Leafs. Just in case you wanted to get upset about that again.

Of all the acquisitions made by Benning, just one of them had a positive corsi relative to his teammates: Radim Vrbata.

Let that sink in: for all but one of the players Benning has signed, traded for, or claimed, their previous team was better at puck possession when they weren’t on the ice.

That’s not a judgement on any of these individual deals. Even looking at the numbers, guys like Emerson Etem, Sven Baertschi, and recent acquisition Philip Larsen look like reasonable gambles. Even Matt Bartkowski wasn’t a terrible gamble on a one-year contract. The main issue with him is that he’s always in the lineup.

It’s also worth noting that none of this takes usage into account: Derek Dorsett and Brandons Prust, Sutter, and McMillan have been used in primarily defensive situations, which doesn’t help their possession numbers.

The issue isn’t each individual deal or player, then, but the trend as a whole. This is admittedly simplistic analysis, but the fact that Benning has acquired just one positive puck possession player in his time as GM is alarming.

This next chart, then, shouldn’t come as a surprise. 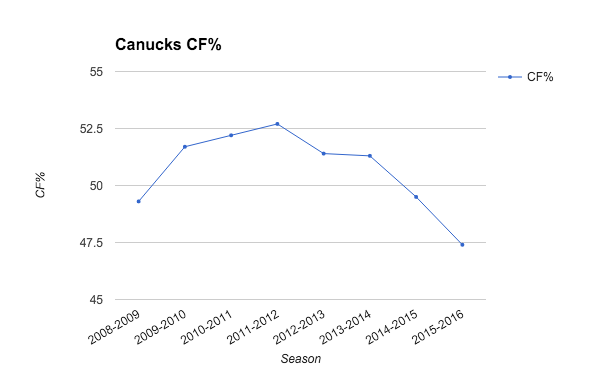 That’s the Canucks CF% by season. 2008-09 was when Mike Gillis, who became known for embracing analytics, as well as anything else that could possibly give the Canucks any sort of edge, from sleep doctors to mind rooms, was hired. He was fired in 2014.

The Canucks have the fourth-worst CF% in the NHL this season. Of course, you don’t need a number to know just how bad the Canucks have been at puck possession this season. That seems to be what happens when pretty much every new player added to the lineup is either lousy at puck possession or is a raw rookie, which often amounts to the same thing.

Again, this isn't complicated, but that's kind of the point. An NHL team has the budget to hire legitimate statistical analysts, preferably ones with a background in sports analytics who are familiar with the existing research that has been done in hockey. They can afford to have at least one or two people to not only use what's already out there to advise the management team, but to potentially break new ground, whether it's in analysing special teams play, zone exits and entries, or even other leagues, to augment prospect scouting.

But the Canucks are clearly not even using the most basic of the "advanced" statistics.

Report a Typo or Error

Report a Typo or Inaccuracy

Email this article to a Friend

Pass it to Bulis has a new home at Vancouver is Awesome
next
Have the Vancouver Courier delivered to your inbox twice a week! You can contact us or unsubscribe anytime.